The launch of the league attracted considerable media attention including SKY BBC, and STV. The season runs from February to November, and two leagues of teams will compete for the top spots.

There is a focus on helping to develop a strong pathway for women to play and compete professionally, and the Scottish FA’s vision is to have 20,000 women and girls registered to play football by 2020.

Aberdein Considine has been a sponsor of St Johnstone Women’s Football Club since 2018 and has its logo displayed on both the home and away kits. The funding has helped the team to meet SWPL Criteria which is required to compete at Elite level.

Charlie said: “St Johnstone WFC play an important role in the local community and for the development of Scottish women’s football and it’s extremely rewarding to know that we have been able to help support their success.

We wish St Johnstone WFC and all the players, coaches and volunteers every success in the season ahead.”

As we look forward to our first home match in many months we are delighted to confirm that Aberdein Considine have continued their short sponsorship for the coming season. Our General Manager Steve Grossi commented “We actually received the news of Aberdein Considine’s partnership renewal just before the league launch in March. However we all know what happened after that ! I’d like to take this opportunity to thank Charlie and his team for their continued support.  They have been supporting us and therefore a huge part of what we have achieved for many years now. Charlie also often pops down to watch the team and is always very complimentary about how we are set up and how well we represent the club, and we appreciate that”. 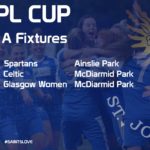 The draw for the SWPL Cup was made at Hampden Park today, and Saints Women have been placed in Group A to face Spartans, Celtic and Glasgow Women.

Having been pitted against Celtic FC in both 2018 and 2019, this is the first time that St Johnstone WFC will play Spartans. They are joined in the group by fellow SWPL2 side Glasgow Women.

The fixtures have been determined by the SWF and will see Saints Women travel to Edinburgh to face Spartans on 9 February before welcoming Celtic for the Glasgow side’s first ever visit to McDiarmid Park on 16 February. The group stage is concluded with a home tie against Glasgow Women on 1 March. 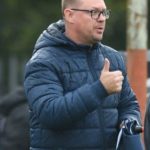 St Johnstone WFC are delighted to confirm that Myles Allan will co-manage the side this coming season, boosting the present coaching team.

With a CV that includes Berwick Rangers, Burntisland Shipyard and Rosyth FC, Allan joined up with Saints Women on a temporary basis midway through the 2019 season.

I’ve really enjoyed my first season at the club, and I’m delighted to step up to share the responsibilities with Jason. We’ve worked well in the past, which was the reason I came on board in the first place when I had a couple of other options on the table.